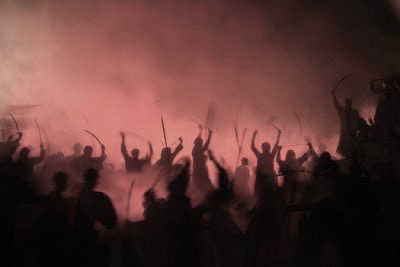 In the last Civil War, the division was clear: slavery vs. non-slavery. The Greys have always described it as a state’s rights issue, but that was horse puckey then and it is now: the “rights” were to own slaves.

The country today is nearly as divided as it was during the Civil War. Although only a few nutcases are thinking of wielding weapons against each other, it feels like we’re on the verge of another Civil War, this one not between the Greys and the Blues, but between the Reds and the Blues.

This is not to belittle the Greys. In 1787, the drafters of the Constitution gave black people 3/5’s the voting value of white people. When you’re raised from infancy hearing blacks are 3/5ths of whites, you tend to believe it.

And it’s not to belittle the fact that there was only one way to plant and pick cotton then, the Greys’ primary way of making money, and it wasn’t with robots.

Even though the ‘Three Fifths Clause” was repealed in 1868, the belief in black inferiority is still in the country’s DNA.

Aside from slavery, though, both sides in the Civil War shared many of the same values: fairness, integrity, protecting the innocent, morality, and trustworthiness, for example.

The divide over our current Civil War, is far less clear. Is it Globalism vs Nationalism, Capitalism vs Socialism, Climate Change vs (what?) Non-Climate Change, Rich vs Poor,  Progressives vs Conservatives? Or the old standby: Republicans vs Democrats?

The answer is “Yes”.

But we’ve survived national differences before. So, what’s different this time?

The first answer might be our Divider in Chief, right? Trump fights his detractors by attacking them, dividing them, and turning them against each other. Anyone who’s not with him is his enemy, and the list changes at his whim. He loves to boil the pot.

But he’s only been doing this for 3 years. And these issues have been growing for far longer.

I suggest the common denominator isn’t Trump; it’s a deterioration of shared values.

Take corporations, for example. Increasing shareholder value didn’t exist before the 20thcentury. It now directs much of the US economy. This week a Federal Court found United Healthcare guilty of denying coverage to tens of thousands of mentally ill patients. They had insurance, but United Healthcare refused to pay for their treatment. That’s emblematic of the entire health insurance field, not to mention the Pharmaceutical industry.

So much for protecting the innocent.

Cheating is another relatively new American value. Over the last few decades or so, it has become rampant in colleges, high schools, and even elementary schools. Until now, it’s been pretty much contained to students. This week, though, the Justice Department charged 50 people in a multimillion-dollar scheme of cheating on entrance exams and bribing college officials, including admissions officials at Georgetown, Stanford, and Yale. And the parents were part of it.

So much for integrity.

(Can you imagine that even 50 years ago? OK, we won’t answer that until Penn publishes Trump’s SAT scores.)

How about an impartial justice system? In the last week Paul Manafort was sentenced to 47 months in jail for defrauding the IRS of $6 million – stealing from the government. And those 47 months will likely be reduced to 22 months. Upon hearing that, a public defender in Brooklyn noted that, in the same week, his client was sentenced to 36 to 72 months – for stealing $100 worth of quarters from a laundry room.

So much for fairness.

In 2016, the year Trump became President, a Gallup poll showed that only 26% of the country had confidence in our Justice system.

The Catholic Church, the bastion of morality, is finally facing up to raping children. In a January 2019 poll, fewer than a third of U.S. Catholics rated the honesty and ethical standards of clergy as “very high” or “high”.

So much for morality.

How about the media? Remember when CBS’s Walter Cronkite shined a spotlight on the Viet Nam War?  According to Gallup, trust in the media, at 72% in 1976, dropped to 45% in 2018. Just last week, the Democratic National Committee blocked Fox News from hosting any of the 2020 presidential primary debates. Why? Because they’re biased against Democrats.

So much for trustworthiness.

These are just examples, but they make a point: a deterioration of shared values is causing Americans to lose confidence in our national institutions. And ultimately, ourselves.

Yes, Trump lies, cheats, and steals – more so than any leader we’ve ever had – but he is not the cause of this new Civil War; he’s just a symptom. It isn’t him; it’s us.