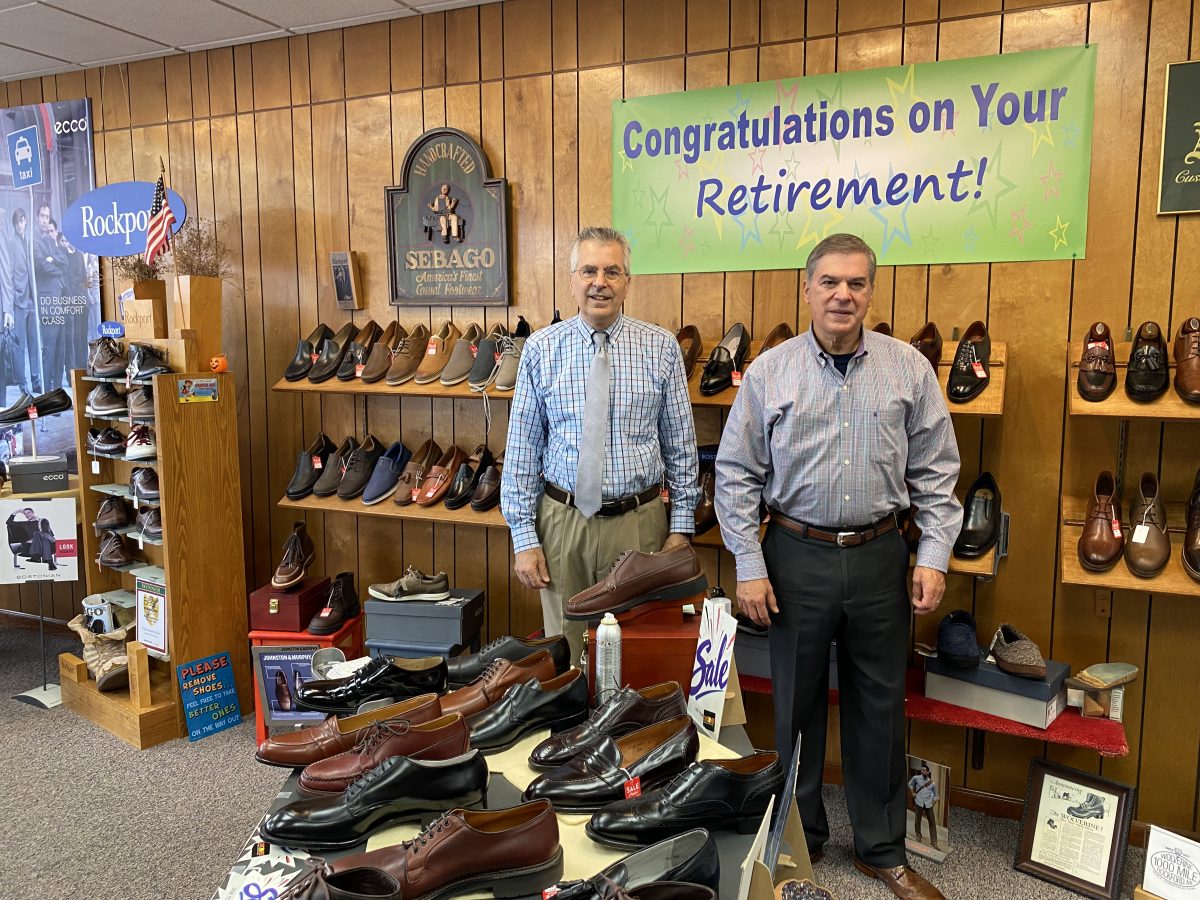 I ran into Greg Landis last week. I hadn’t seen Greg since he and his older brother Jim closed Landis Restaurant, the best lunch place in Wayne, PA, not to mention the entire Main Line. It was right next to the old library, now a doctor’s office on Lancaster Avenue, which is next to a bank building that has had numerous owners over the decades.

Greg, still horse-country handsome, started up right where we had left off several years ago, when I moved out of the area – arguing politics. This time he didn’t love Biden, whereas years ago, he defended Clinton. He always argues policy and job effectiveness, not culture. So we may vote differently, but still remain friends.

Across Lancaster Avenue from the now boarded Landis’ is D’Amicantonio’s Shoe Store.

Angelo D’Amicantonio, a custom shoe maker, came to Wayne from Italy in 1912. In those days people of means would never build homes on Lancaster Avenue because it was a dirt road populated by immigrant riff raff. With resulting low prices Angelo was able to start a shoe store there in 1932. Angelo’s son, Phil, followed in Angelo’s footsteps (if you’ll pardon the expression – OK, I admit it – a Dad joke). He was followed in turn by his sons, Lou in 1974 and Bob in 1978. You can see photos of Angelo and Phil behind the cash register Lou and Bob work today.

“Now”, notes Bob with a hint of a smile, “these buildings are worth a lot more than those homes.”

The skills that Angelo brought from Italy and passed down to two generations, have made his store a stalwart of Wayne, PA for 89 years: repairing old shoes, softening the backs of new shoes, fitting the shoes perfectly, choosing manufacturers of high quality, and treating customers like family.

If you go to the mall for a pair of shoes, you may get the same brand and even at a slightly lower price, but you won’t have Bob or Lou to measure your feet perfectly or tell you why one shoe brand is better than another. They won’t fix the lace hook on your shoe, as Lou did for my son (“nah, no charge”), or identify my Plantar Fasciitis and give me inserts that made it go away (“Really, Henry. You gotta take care of that”).

And I doubt very much that you’ll get a history lesson that puts a smile on your face.

That’s a hallmark of “Mom and Pop” places.

One day, when my kids were little and I was up to my eyeballs in work, I took them to Harrison’s, a small clothing store in Wayne where Lancaster Avenue seperates North Wayne Avenue from South Wayne Avenue. Richard Levy, the owner, found exactly the right clothes for each one, even as he helped other shoppers. On the way out I asked if I could send them in by themselves from time to time and have them charge clothes.

“Sure”. No hesitation, no credit check, no “who do you know?” For the next 5 years or so, they got clothes and never – not once – came back with crummy clothes, or too many clothes, or ill-fitting clothes. Every time, I would drop in a day or so later and pay the bill. We’d chat. And I’d go back to work.

Harrison’s and Landis’ are memories now, as are Sweet Daddy’s, Wayne Sporting Goods, and so many other stores that define Wayne, PA and all small towns.

D’Amicantonio’s is about to join them. After over 40 years of 6 day weeks and no vacations, Bob and Lou are retiring. I asked Lou how they feel.

“The tough part will be leaving the customers.”

I hope another family owned store will replace them, and not a CVS or Verizon or Wells Fargo or some other chain devoid of heart or soul. I hope the same kind of integrity and devotion three generations of D’Amicantonios gave to Wayne will move into the same building.

And I hope, if you were lucky enough to know Bob and Lou, Greg and Jim, Richard, or any other owners of small shops in small town America, you’ll be thankful.

It’s the old story of Democrats herding cats vs Republicans walking in lockstep.

While Democrats dithered and fought over Biden’s “Build Back Better”, Republicans quietly worked together promoting fear of Democrats… (well, Socialists, but that’s what Democrats really are, right?).

Two Democratic Senators and a handful of Democratic House members made Democrats look like the spoiled children they are.

For weeks, Democrats Manchin and Sinema kept refusing to go along with the other 48 Democrats when 50 votes would have won. They wouldn’t even define what they wanted. And the arguments stretched through the summer like a bad Netflix series: the same inane plot every week.

Manchin wouldn’t approve improvements slotted for one of the poorest states in the country – his state. He claims his reticence is based on national economic concerns, but it’s really about ego. Sinema, while standing for nothing, tried to wear the mantel of McCain who actually stood for something, all the while collecting huge amounts of Republican money.

For the first time in his life, Manchin, a multi-millionaire holds the rudder of the ship of state and he’s not about to let the crew – or passengers – tell him he can’t steer exactly, precisely, perfectly where he wants to steer. For the first time in her life, Sinema has everyone in the country asking what she wants as she basks in the glory of keeping them all looking for the perfect answer.

Pelosi kept circling the herd, begging and pleading them to go in Biden’s direction. Schumer did everything but prostrate himself before Sinema and Manchin.

If ever there was proof that members of Congress have one goal in life, to be re-elected, this was it.

And it has continued for months, slowly and unrelentingly draining the Democratic party of relevance.

As the Virginia Democrats go down in confusion, talking, talking talking – and saying nothing, as Biden limps home from the COP26 Climate Change Summit, weakened by his inability to get things done at home, McConnell and the Republican army, along with Fox News, QAnon, Trump, DeSantis, and others, rub their hands together in anticipation of the 2022 midterms.

Meanwhile, the climate keeps changing, the homeless keep filling the streets, mothers get no help with their newborns, drug prices make the sick sicker, the infrastructure continues to crumble, children go without care, education continues to slide, the healthcare system continues to spiral, the poor get poorer and the rich don’t care…