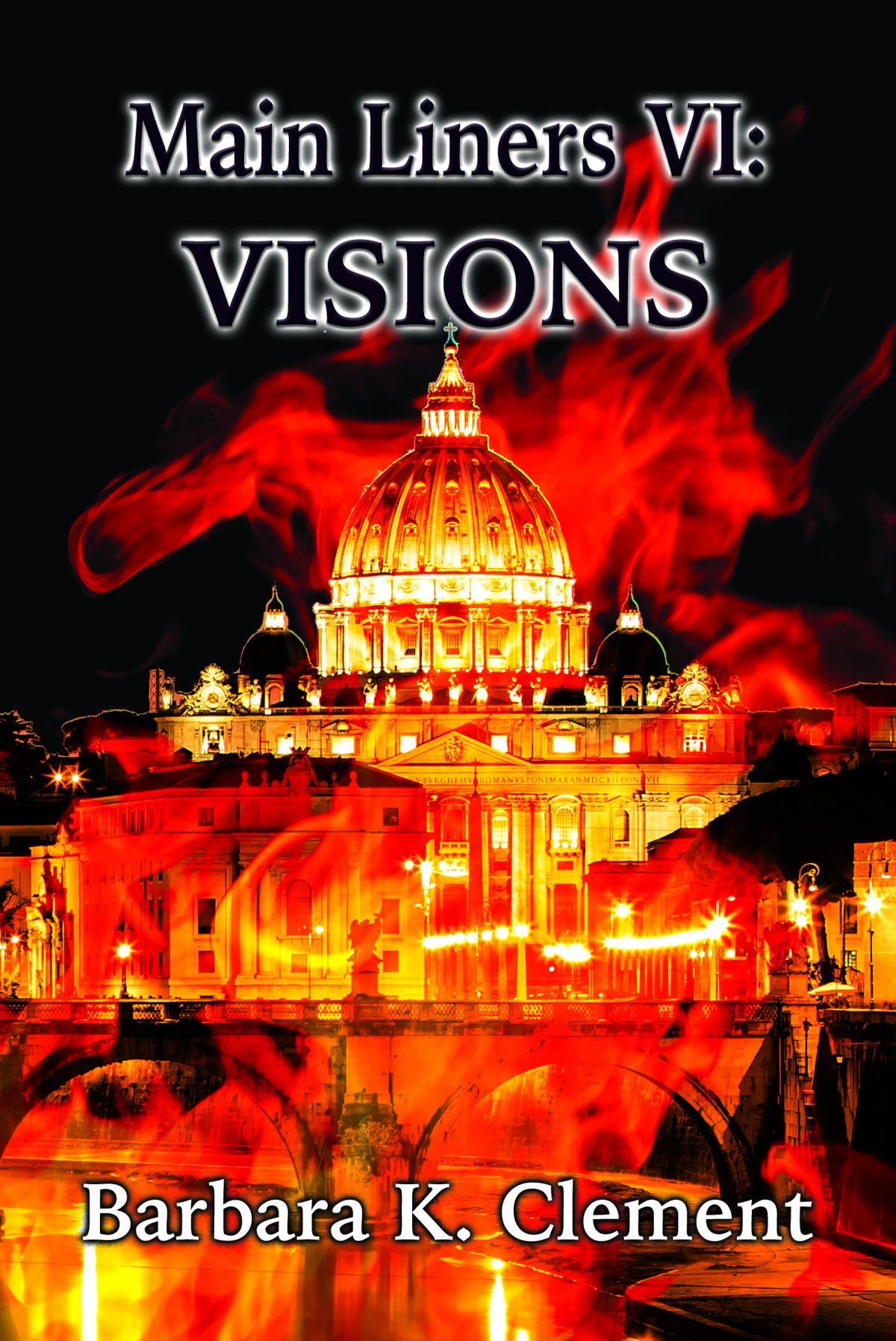 On the first page of the book, a guy leaves a large estate in BMW’s version of a James Bond car. He is deliberately T-boned by a box truck.

The heroine is a CIA agent living on Philadelphia’s Main Line (a place, we all know, where excitement and adventure are biblically forbidden).

By page 8, when most books are just starting, the reader is in Italy’s Vatican City watching the Pope scream in terror from his third nightmare this week.

The book is titled: Main Liners Mysteries VI, Visions, the only unexciting line in 377 pages. It is the sixth in a series of page-turners from Barbara Clement, who invests each book with more twists and turns (and crashes) than a police chase through Rome.

…It was lunchtime on a fall day, the air filled with vestiges of a balmy summer.  She was sitting at a table on the porch at the Main Line Cricket Club. Her blond hair was precisely cut, her eyes warm and inviting as she sipped a cool drink and perused the menu. She was unaware of the lunch crowd chatter from adjacent tables.

A man walked up to the table. He paused to look at her for a moment. Then, “Barbara?”

Oh, wait. That’s me. And The Main Line Cricket Club is a stand-in for the Merion Cricket Club, where the upper crust play tennis and cricket, and have since 1865. I’m there for a light lunch and conversation about Main Liners Mysteries VI, Visions.

I notice immediately that Barbara has a certain je ne sais quoi, the kind spies have.  I know. I’ve read John Le Carre and Tom Clancy.

I ask why the book is set in The Main Line, instead of, say New York or Paris.

The short answer: because that’s where she and the love of her life, her late husband Charlie Clement lived, and where she still lives. The long answer is more wandering.

It starts as far away from the Main Line as one can get, not counting Camden. Born in Hutchinson, Kansas, she remembers a very midwestern father and having only one book as a child, The L’il Wooly Lamb. When she is a teenager the family moves to a colder version of Kansas, Minnesota. She completes a Degree in Psychology at the University of Minnesota in 3 years.

…Agents of the CIA noted her strong intellect and put her through a number of tests, each one designed to reveal critical aspects of her intellect and personality – aspects even she didn’t know. The results demanded immediate action. They dangled a hefty salary in front of her. She was torn between her father’s expectation of a cornfed life and…

Oh wait! That’s not from the book, either. That’s from her real story, except it was the NSA not the CIA. And once her father learned the salary, he cherished her independence.

Her career after the NSA includes stints as a columnist for a Staten Island newspaper, Vice President of Advertising and Creative services of a New York fashion company, then VP of International Public Relations for Estee Lauder. When her beloved Charlie changes jobs from Manhattan to the Main Line, she does, too, becoming Assistant VP for Communications and Public Affairs and Constituent Publications at Villanova University, during which she helps set up 6 month internship programs at the Vatican – the only such internships in the entire US.

…In 6 months the outgoing American intern turned the Vatican into her personal school room, absorbing daily routines and the inner workings of this Holy place. Her inviting looks were wasted on most, but occasionally, just occasionally, found admiring eyes…

No! That’s not in the book, either! Although a lot of the book’s action takes place in secret enclaves of the Vatican… with details only a studious intern could have brought back to Villanova…

After the other tables had cleared, I ask Barbara if she worked from an outline, as many authors do.

“Nope”, she says. “I just start writing and the writing takes me and the reader on a great ride.”

And a great ride it is.

Now, I could have included her story about her Jewish grandmother, Sophie, who became a Catholic to avoid discrimination … and at age 15 moved to the US after marrying a 30 year old guy…who disappeared with a new girl friend, not knowing his wife was pregnant…

But that’s for Barbara’s next book.