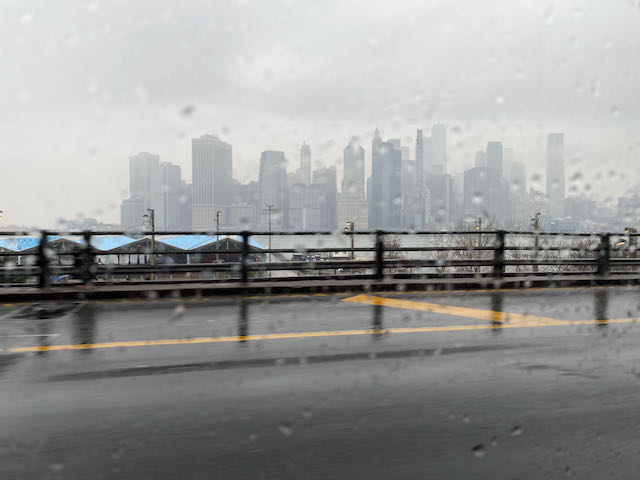 At 7:03 AM on Christmas Day, he loaded the bags of presents into the car, backed out of the driveway, and set off for New York.

The temperature was 30 degrees, a wet cold, which can be worse than 20 degrees of dry cold. He turned up the heat and loaded the address into Google maps.  (I know, he shouldn’t have done it while driving, but 7:03AM was an hour later than he had planned. And besides, who else would be out on Christmas morning?)

“Two of my kids are quarantining in New Jersey and one in New York, while I’m stuck in PA?!”, he had said to himself the night before, “Screw Covid!”

The rising sun was just a faint glow behind the thick fog that blanketed route 95 and drained meadows and towns of color all the way up and across the Verrazano Bridge. During the entire two hour drive, he saw almost no traffic, just a handful of cars actually following the speed limit and two ambulances dashing like greyhounds toward unknown hospitals instead of being stuck in traffic, sirens hopelessly screaming. It brought back memories of when 95 had first opened and felt safe and sleek.

His plan was to drop off the presents without being seen, just as Santa had always done. Now that the kids were grown, though, Santa would have to be more devious than usual. He’d have to sneak the presents onto front stoops or into apartment lobbies, in daylight, and then bolt before anyone noticed.

The Manhattan skyline, filtered white by the mist, was unexpectedly etherial and silent. He scooted through empty Queens streets, marveling at a New York so peaceful and quiet, and came to a stop at a three story 1900’s high rise, still dignified, still impressive over 100 years later. Leaving the car running, he tip-toed into the empty lobby with two bags filled with multi-colored socks, artists’ pencils, photos of his son at age 3, and he couldn’t remember what else. Then he ran back to the car and gunned it for New Jersey.

An hour later, he sneaked onto a grey porch, this time on his toes to minimize sound, in a drizzly, still sleeping neighborhood of Summit, New Jersey. Christmas tree lights flickered through closed curtains. The mist was rising a few feet off the empty street, revealing slumbering trees and silent shrubs, all well groomed and motionless. Another bag left, oh so quietly.

Back to the car, back up the road, this time toward Morristown.

Two down, one to go!

The last house was ten yards from the road, down a steep set of wet, wooden steps  He duplicated the tip toe dash, this time holding onto the railing with one hand, while the other clasped the last Christmas bag – a hushed feat of balance and strength – but nothing compared to his footrace back up the stairs.

All three down! Including grandchildren!

The drive back was anti-climactic (with the exception of more cars driving, two trucks barreling, and several ambulances dashing). So, while still in New Jersey he called his kids to see if they found the presents (and to gloat with silent pride).

“Thanks, Dad. Did you get an Uber driver to deliver them?” asked the first one.

“All I can say is Santa did it”, deftly dodging the real question.

“Yes! What a great surprise!” said the second. “Are you here?”

“No.” he said. “You’re there. I’m here”, getting a laugh and again dodging the real question.

Then, the third: “Are you in Pennsylvania?”

Later he came up with really clever non-answers like: “I’m always in Pennsylvania” , “Isn’t everyone?” and “Where else would I be?”

But he was tired and without wit. Taking over for Santa was a lot more demanding than he had thought. So he panicked.

“Yes, I am.” – A bald-faced lie, something he had raised these very kids to never do.

He felt guilty, but not for long. There are times when one has to lie in order to uphold the larger truth: Santa is real.