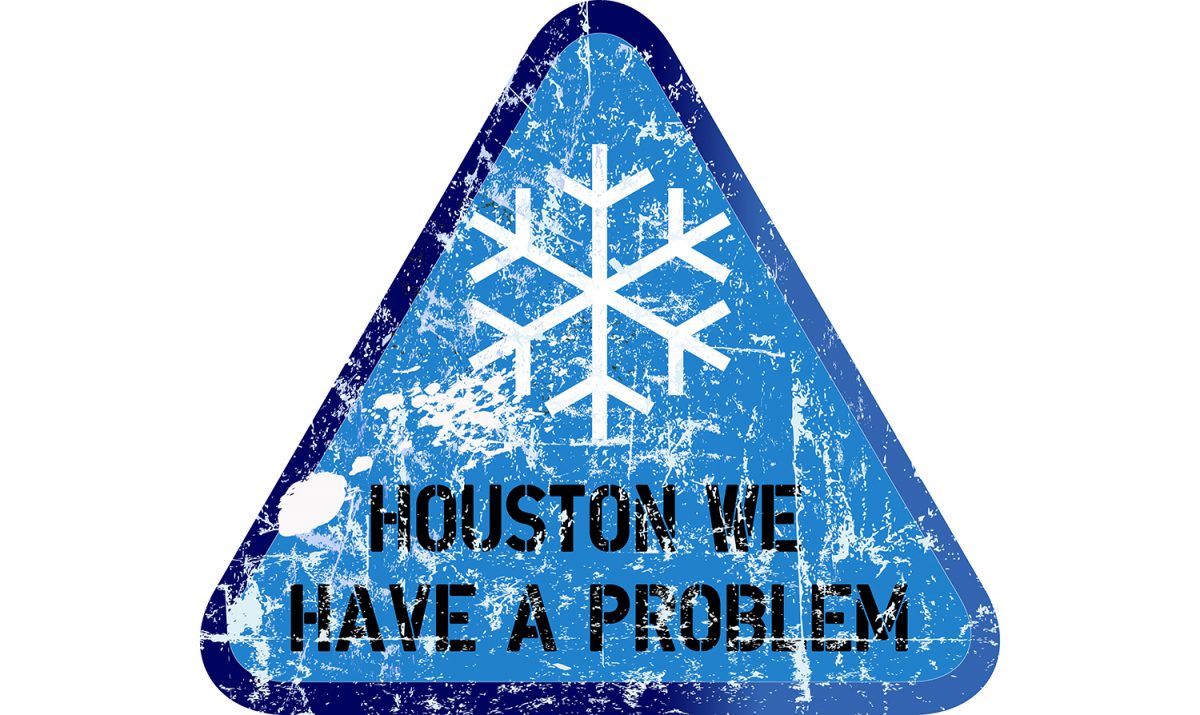 Half the state without drinking water. Electric bills of thousands, one for $16,752. Gas lines and wind turbines frozen and inoperable. Millions without power. Ted Cruz shamed for escaping to Cancun because he could, while his constituents were dying inside their houses.

That Texas swagger got pretty stilted this week. The storied Lone Star state, bastion of rugged male individualism, self-sufficiency, and humble bragging, got blown away by an old lady: Mother Nature.

At first Governor Greg Abbott and the coal-oil-gas cabal blamed the renewable energy sector – wind and solar – an easy target. But then the word got out that wind and solar provide only 20% of the state’s energy on a sunny, windy day, and a mere 7% on a cold, snowy day.

So now, he’s blaming the state energy sector, a little closer to the truth, but also a pile of horse puckey. The Texas energy sector was designed built and modified by Texans, and no-one else.

In the 1930’s the Federal government started regulating interstate transmission of electric power. Texas, by that time, the muy grande hombre of energy and anti-regulation, immediately refused to send or receive power across state lines.

Texas didn’t need energy or regulation from anyone, pardner!

With no regulation, energy competition in Texas became the wild, wild west.

In the 1970’s, in an effort to calm that wildness, the state formed the Electric Reliability Council of Texas, ERCOT. But the people who ran ERCOT were still oil-coal-gas good ol’ boys, so little really changed.

In 1999, Governor George W. Bush went even farther. He deregulated the Texas energy sector, leaving it a purely market-driven, supply and demand system.

But when Arctic weather hit the fan in 2011, Texas did nothing. So it happened again this year, only far more catastrophically. Supply dropped, demand grew, prices skyrocketed. And, because Texas had refused to join either of the two main power grids serving the rest of the country, Texans were left out in the cold – literally – and facing utility bills of thousands of dollars.

Compare that to New Jersey. When Hurricane Sandy hit in 2012, New Jersey residents lost power for weeks. New Jersey utilities, following regulations, billed them only $15 that month vs a normal bill of around $150. No-one was charged thousands of dollars.

“As ye sow, so shall ye reap”, some wise old guy (I think his name was Jerry) said eons ago.

But before we non-Texans laugh up our sleeves at anyone with a twang, we might look at ourselves, too.

Take the Covid19 crisis. Some states sent doctors and nurses to New York in the beginning. New Yorkers returned the favor later. Even though it has the fifth largest economy in the world, California couldn’t deal with the last two years’ fires by themselves; they needed and got help from other states. New York and its surrounding states are incredibly dependent on each other, economically and culturally.

That is why we call ourselves the “united states”. We help each other out in dealing with things as large as a pandemic or as small as winter storms.

That concept translates equally to international situations. Nationalism is a nice idea in terms of culture and history, but not when it alienates other countries who could help us. We can’t fight off Russia’s or China’s or Iran’s attacks without the help of our allies. We can’t take on the next pandemic without our allies along with other countries. We might get to zero carbon emission by ourselves in 30 years, but we can never survive climate change itself without the help of the entire world.