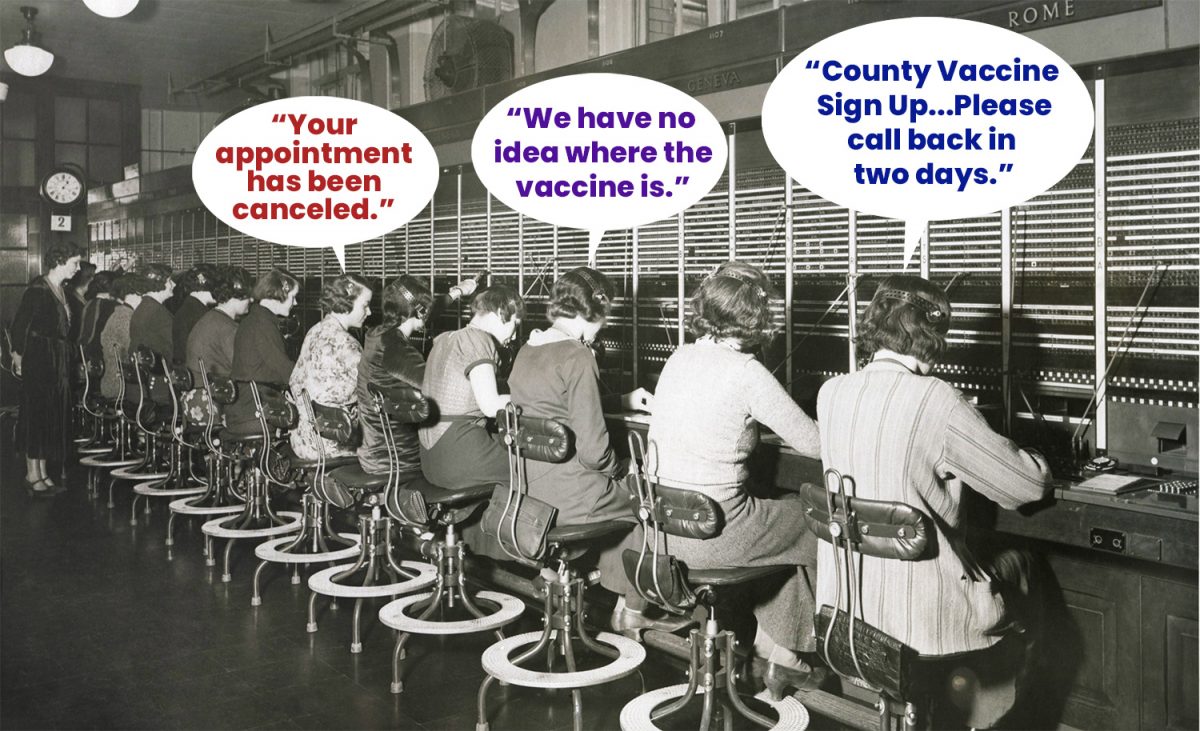 The alarm goes off at 5:35AM. I don’t bother to get dressed. I just roll out of bed and into the kitchen. Ok I don’t roll, but I sure don’t rock at that hour. The dog wonders in as the coffee is brewing. He yawns, then follows me into the living room. He collapses on the floor as I collapse on the couch, laptop on my lap, iPhone by my side.

By 5:55 I am on the vaccine website, waiting for it to allow new visitors. At precisely 6:00AM, the screen changes, telling me the website is full, but the page will refresh in 60 seconds. I scroll down to see a list of counties and the number of vaccination slots available.

After a few minutes of staring at the screen, my mind begins to wander. I wonder if there’s some supervisor in some office somewhere watching the screen, too, although not in hopes of a vaccine; they’re hoping the servers don’t crash.

That person(s?) has no idea who I am or anything about the thousands of other 65 and older people, healthcare workers, or other types, that are staring at computers.

We are only numbers…well, not even numbers, just parts of an algorithm, a combination of numbers that need to align perfectly in order for just one person to get in line for that life affirming shot.

Maybe those at the other end of my computer are drinking coffee too. Maybe they’re yawning. Maybe they, too, are looking out the window as dark turns to day. Hey, we might have a lot in common!

The dog sits in front of me, an expectant look on his face. (No way, Buddy. You’re just going to have to hold it. We’re talking Covid here!)

Or maybe there is no “they” at all. Maybe at the other end of my computer is … just another computer.

(He lies down again and lets out a sigh)

Or maybe I’m one of hundreds of thousands of excited over-65 year olds, seconds away from a screen that will allow me to apply for a vaccine slot.

We walk under birds sunning themselves on telephone wires, squirrels chasing each other up trees, clouds hurrying across a blue sky.  The dog casually waters a few bushes, which don’t seem to mind. Then it’s back to work.

At exactly 9:00, I try another approach. This time, per other web instructions, I phone a county vaccine number. It’s just like before, only instead of watching numbers counting down on a screen, I listen to a busy signal… followed by a click and a dial tone…then call again.

At first I imagine a bank of hurried switchboard operators like something out of a 50’s movie. It’s a nice image, but soon replaced by one more realistic: a bank of servers driven by an unseen algorithm, not a person in the frame.

After around 25 minutes, I get a recording saying there are no more vaccines, to try again in two days.

Darn! I enter it in my calendar. Then,.. Hey! Better than two weeks! Right?

I look at the dog who has retired to his favorite corner for a mid-morning nap. He again opens one eye at me for a few seconds, then closes it with a sigh.