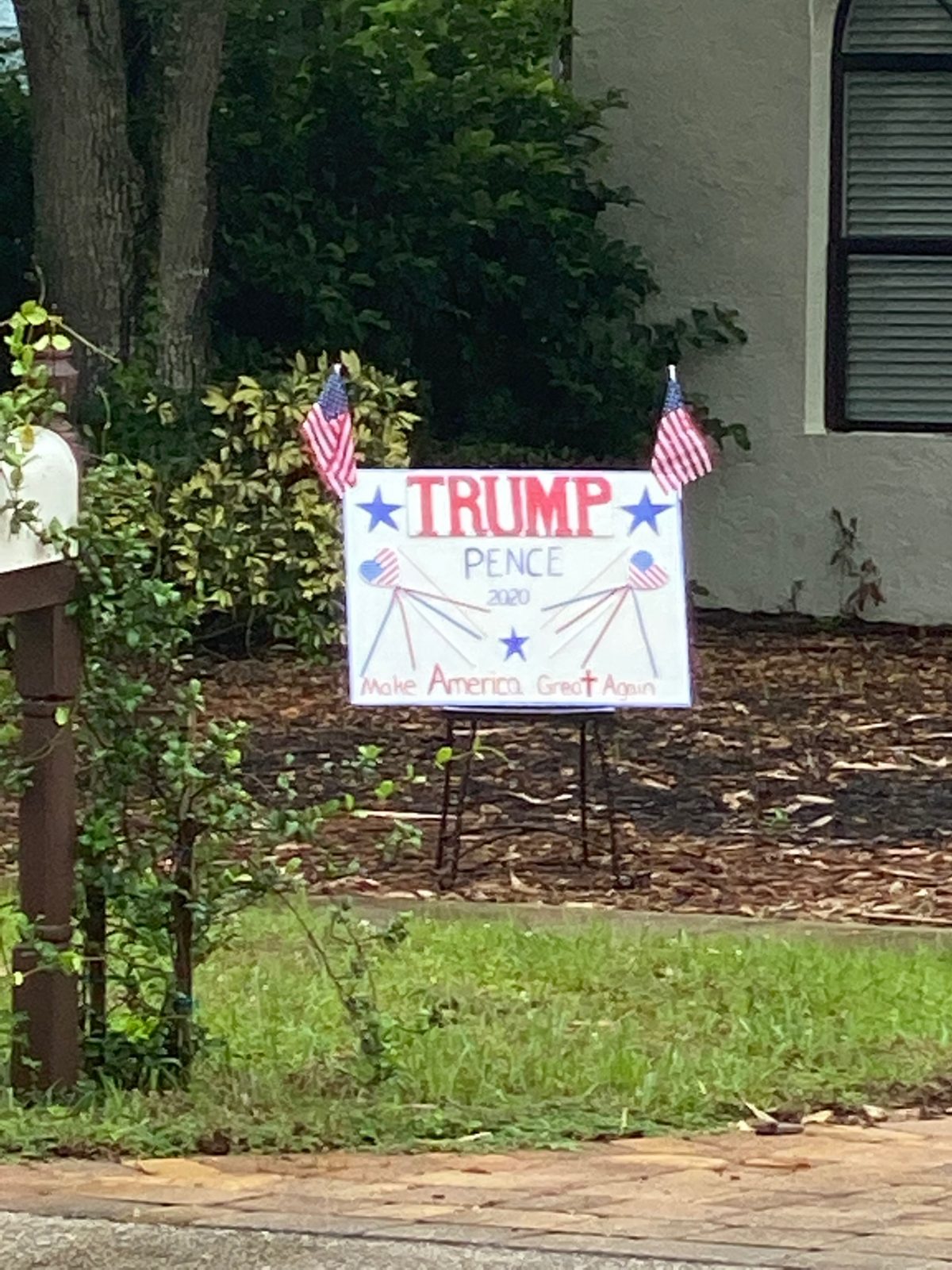 I was thinking about the election the other day. Really. Between TV football games and Covid19 and helping my neighbor and his wife install a new mailbox post in the middle of pouring rain (don’t ask).

She is far more politically intense than he is. Their lawn is decorated with Trump signs she painted herself. They look pretty good, especially next to the official Trump/Pence signs nearby. And they thumb a nose at everyone who thinks Republicans have no artistic sense.

She asks if I am behind the Biden/Harris signs in some other yards, one of which is mine. I cop to it, but quickly compliment her signs. She smiles.

Her husband gives me a silent wink of approval as he skillfully packs the base with dirt, and then attaches the mail box to it. Clearly this isn’t his first rodeo with mailboxes or a politically passionate wife.

Self-taught skills, whether in artwork or home repairs, have always impressed me.

Of course, if I needed some major house repairs, or say some artwork for a the living room, I wouldn’t necessarily go to my neighbors for it.

Which makes me think about the election.

Politicians at a low level are also do-it-yourselfers. I know because I was on my town Council for a few years. I knew nothing about politics or running a town. Fortunately the town manager, Pat McGuigan, did know about managing and politics, as well as leadership. He taught all three to all seven of us, subtly so we could think we were doing-it-ourselves, but effectively enough to prevent any grievous mistakes.  The town did quite well under his tutelage.

At a higher level the good politicians either have lots of experience or, if their constituents are lucky, degrees in Political Science. Politicians without any knowledge of politics or governing can do some real damage.

Knowledge matters. That’s why doctors have medical degrees, lawyers have law degrees, teachers have teaching degrees, and so on.

And they all get tested before they can work.

I think politicians should have to pass tests too, maybe even get a license. We all know what happens if they screw up: we pay one way or another.

The politician tests should include the Constitution, some history, particularly of this country, and every one of the 100 questions on US Citizenship Naturalization Test (the test immigrants must pass before becoming US citizens).

Then someone who, for example, didn’t know about the Battle of Belleau Wood in WWI, or that Frederick Douglas was an abolitionist, orator, and escaped slave in the 1800’s (not today), or that it was the English who burned down the White House in 1812, not the Canadians (Canada didn’t exist then), or that Russia made major incursions into Ukraine in 2015 or that the US is required to defend all NATO members from attack, or… well you get the idea… that someone would not have been elected President.

Yes. These are actual examples of the lack of knowledge of our current President.

But I don’t mention them.  Instead, we joke about repairing a mailbox in the middle of a rainstorm as I help them collect their tools. I return to my yard and its admittedly unartistic signs.

“Avoiding politics makes good neighbors”, says the voice in my head in 2020. A sign of the times. Sad, isn’t it?