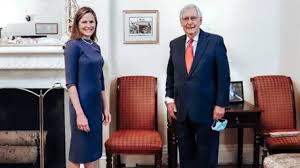 You know what angers me most about the Senate Judiciary Committee hearings? The lies – not Trump’s, McConnell’s.

Here’s the truth. Those lies had nothing to do with voters. They had everything to do with McConnell’s long term goal of shaping the US Judiciary into a reflection of his biases, his racism, his ‘screw the little guy” attitude.

McConnell has used his power to confirm 200 Federal Judges – every one conservative – since Trump became President. They include 51 circuit court judges, 139 district court judges, and 2 Supreme Court Justices.  He quietly confirmed 15 Federal Judges while the rest of the country was focussed on Trump’s impeachment. And, during just one week this past September, he pushed through 6 more.

Before Ginsberg died, the Supreme Court was reasonably balanced, with 5 Conservatives and 4 Liberals. Now it will be 6-3, the very definition of a stacked Court. This Court will make religious and conservative bigotry legal for decades. This Court is designed to end healthcare for 23 million people, as well as overturn Roe v Wade, affecting fully half of the entire country for the next 40 years. Republicans may lose the Senate, the House, and the Presidency here and there over those 40 years, but their wall will be the McConnell Supreme Court.

That’s why McConnell is so loyal to Trump. It’s a pact with the Devil. The question: which one is the devil?

Now, even as the sham hearings unfold (McConnell already has the votes, so the hearings are just theater), Florida Senator Mark Rubio is proposing a bill to limit the number of Supreme Court Justices to the current 9. Why? Because the next time the Democrats take power, they can increase the number from 9 to 13, thereby bringing the balance back to where it was with Ginsberg. Changing the number of judges has been done many times before. Nothing in the Constitution prevents that, until or unless Rubio and the Republicans can.

We all know politicians lie. But until recently the lies were more restrained, part of the “art of politics”,  like “shadings” and “half-truths”. Now, with Trump as McConnell’s big brother, the restraints are off.

But enough about McConnell and Trump’s lies, let’s hear from Amy Coney Barrett, the Judge,… no, the politician,… no…

Barrett in 1998, in the Marquette Law Review: “(Catholic judges) …are obliged to adhere to their church’s teaching on moral matters.”

In other words, a judge’s religious beliefs are grounds for eliminating Roe v. Wade.

The writers of the Constitution in 1787: “Congress shall make no law respecting an establishment of religion, or prohibiting the free exercise thereof…”

Roe v. Wade does not prohibit the free exercise of any religion. It allows women to choose which religion or non-religion to exercise.   Reversing, state by state or nationally would, however, make all women subject to religious law disallowing abortion, no matter their religion, thus “prohibiting the free exercise thereof”.

Barrett in 2017, while being considered for Appeals Court, “If you’re asking whether I take my faith seriously and I’m a faithful Catholic — I am, although I would stress that my personal church affiliation or my religious belief would not bear in the discharge of my duties as a judge.”

Wait. What? Now she’s not “obliged to adhere to their church’s teaching on moral matters?”

Barrett in 2016, “I don’t think abortion or the right to abortion would change. I think some of the restrictions would change … The question is how much freedom the court is willing to let states have in regulating abortion.”

Oh, I see. So now as a judge, she wouldn’t prevent a pregnant woman in, say Alabama, from getting an abortion, Alabama would.  Clever.

In other words, Good-Bye Roe v. Wade, one state at a time, but Barrett didn’t do it.

Barrett in 2017: “Chief Justice Roberts pushed the Affordable Care Act beyond its plausible meaning to save the statute.”

And the final word from McConnell… no, Trump… no, Graham… no, the Republicans… no, Judge Barrett, in 2013:

“If the Court’s opinions change with its membership, public confidence in the Court as an institution might decline. Its members might be seen as partisan rather than impartial and case law as fueled by power rather than reason.”

Yes, Judge Barrett, well put. No “might” about it. You’ve described the McConnell Court perfectly.