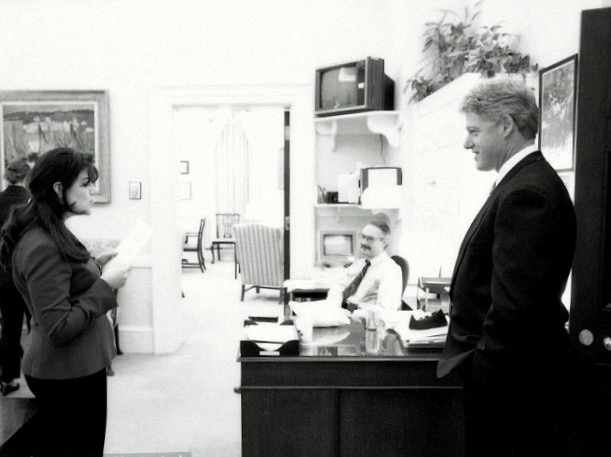 When Bill Clinton was impeached, a lot of people thought it was stupid. After all, he was just committing adultery. People do that everyday.

Others thought impeachment was appropriate, not just because it was adultery, but because he was using the power of his office to seduce an intern. They were shocked at the abuse of power.

But when, during his testimony, he came out with “It depends on what the meaning of ‘is’ is”, we all groaned together.

But, sleaze isn’t a high crime or misdemeanor in this country. In fact there’s no mention of sleaze (or lying, bullying, cheating, misogyny, adultery, etc.) anywhere in the Constitution.

Makes you wonder, doesn’t it.

Is it because people who wrote the Constitution had too much integrity to consider the notion of a sleazy person running for office? That would be my guess. Remember, that was before the Clintons, before Citizens United, before greed became the screed of politics.

George Washington was elected President because he was impeccably honest, because he put country first. As a result of his integrity, he could very easily have become King George Washington. In fact, a lot of people wanted him to be. But he turned them down. He had too much integrity.

(I have a suspicion – just a suspicion, mind you – that our current President would not turn down the word “King” in front of his name.)

Integrity seems such an old-fashioned concept in today’s world. There was a time when movies and books and newspapers lauded integrity.  Comic book heroes, movie heroes, book heroes were models for integrity. Granted, they were pretty one-dimensional, but they celebrated qualities like self-sacrifice, hard work, honesty, reliability, working for the common good, and what was called “the American Way”.

The American Way helped save the world from genuine disaster in World War II. Without the US, fascists would be running the world now. Although it wasn’t as dramatic, the world also benefitted from US involvement in the Cold War.

While corruption has been around as long as the Republic, it was once disdained. Our institutions fought it and usually won.  As a result, people had faith in our institutions and leaders.

Then, in the 1980’s, the ethos changed. The Wolf of Wall Street pushed aside Superman and the other models. Greed became a respected motive. Win for the sake of winning became the mantra.

Whether it’s cynicism or reality, many Americans today consider our institutions corrupt. Only 25% of us approve of Congress. Our health system ranks worst among the wealthy countries. The gap between rich and poor has been widening since the 1980’s. Our educational system is graduating people from high school who can’t read or do basic math, much less think critically.

We have elected a President with the vocabulary and temperament of a 3rd grader and the ethics of a mafia don. His corruption of the Office of the Presidency is ongoing and relentless. From using the Presidency to fill his hotels to trying to extort Ukraine, it never stops.

A few examples: over 13000 lies since taking office, shredding international relationships, taking 5400 children away from their parents since 2017, relentlessly attacking the press, deserting allies on the battlefield, denying Climate Change, using tax payer money to attack his political opponent, obstructing the Mueller and Impeachment investigations, using his Presidency to fill his hotels.

So, how did we wind up with such a corrupt President?

“The whole system is corrupt” was the reason a friend recently gave me for supporting Trump, this after acknowledging Trump’s corruption.

When I brought up the lack of integrity in politics today, when I suggested the notion of fighting corruption instead of tolerating it, he smiled and patted me on the shoulder as you would a child after The Santa Clause talk.

He was too polite to call me quaint.