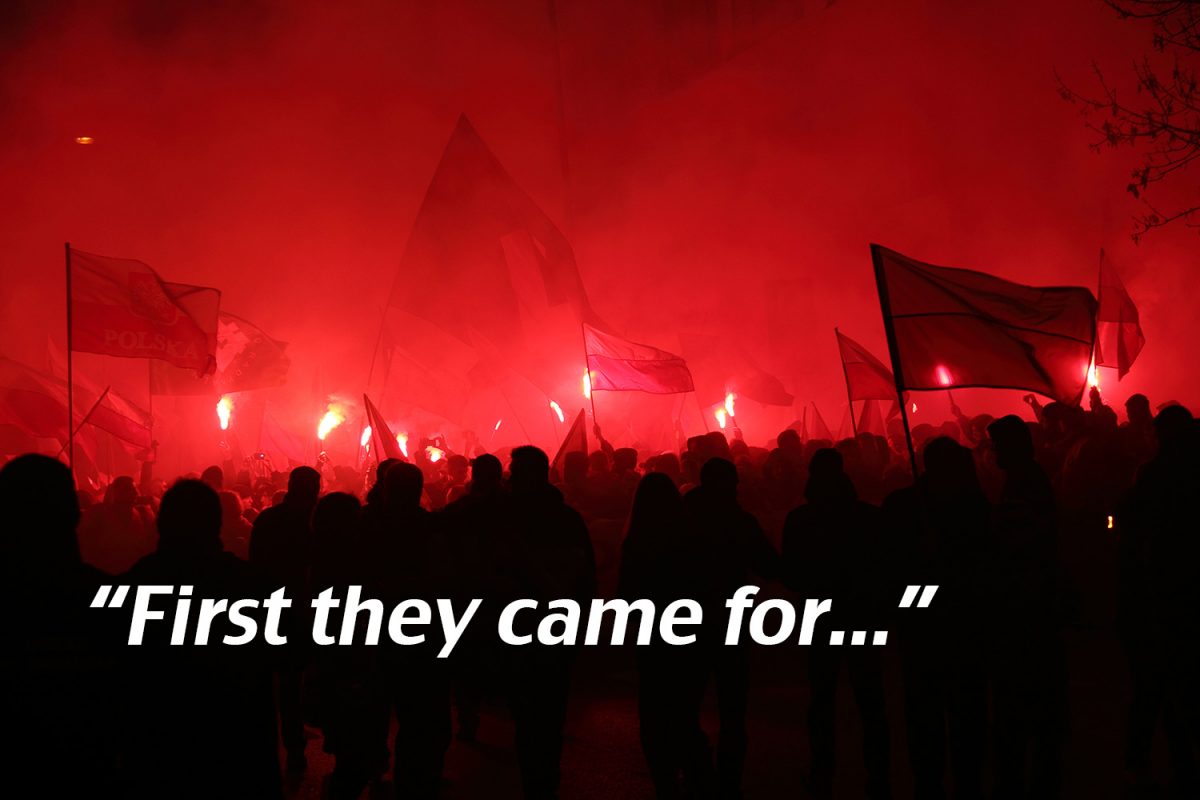 The riot at the Capitol last week brought to mind the Martin Niemöller poem, First They Came, about Germany in the 1930’s. For example, in the first lines below, substitute “Black” for “Communist”.

They came for the Communists, and I

didn’t object – For I wasn’t

The Civil War freed slaves and gave black men voting rights. Taking advantage of Lincoln’s death, Southern white supremacists took just a few years to undo those advances. As a result, the fight for black equality has continued ever since, from Jim Crow laws, to school desegregation, to voter suppression, to a racist Justice System, to rioters – almost all white – at the Capitol last week shouting white supremacy slogans.

They came for the Socialists, and I

didn’t object – For I wasn’t a Socialist;

In spite of the rioters’ aversion to socialism, this country is no stranger to it. We’ve had public schools since the 1800’s. We’ve had Social Security since the 1930’s. Eisenhower proposed national health insurance in the 1950’s (the head of GM at the time told him it was unnecessary). In the 60’s Johnson added Medicare.

Most of those who fear socialism mistake it for communism which, in today’s world, is really dictatorship. Which the right extremists abhor even as they follow a man who dictates.

They came for the labor leaders, and I

didn’t object – For I wasn’t a labor leader;

Republican administrations, along with corporations, have worked to weaken unions since Herbert Hoover. The Trump administration touts support for unions, but has further weakened them. Over the last 50 years union membership has shrunk from a third of the workforce to a tenth of the workforce. Workers at the country’s largest employer, Walmart, for example, have no union and qualify for Food Stamps.

They came for the Jews, and I didn’t

At the riot last week “The Proud Boys”, part of the white evangelical movement, stopped to kneel in the street and pray for God to restore their “value systems”, after which their leader told the media to “get the hell out of my way” as they moved on to assault the Capitol building and Congress.

Anti-semitism has been a theme of White Supremacists since, well, forever. It was a rallying cry of the Charlottesville violence, at the Pittsburgh synagogue shooting, and at the Capitol last week with the “Camp Auschwitz”  hoodie and anti-semitic T-shirts.

Then they came for me –

And there was no one left to object.

Martin Niemöller’s poem describes the apathy many Germans had toward Hitler’s fascists. It was as though a Boa Constrictor had surreptitiously encircled the German soul and Germans had no idea until it was too late.

The scenes last week of rioters with assault rifles, knives, Molotov cocktails, and pipe bombs, searching for elected leaders who could only hunker down, recalled the black and white images I was shown as a kid, during history lessons on Kristallnacht, the Holocaust, and WWII. But that history has faded and is rarely taught today. A big mistake.

Has “I didn’t object” happened here? Not this week. In fact most of the country has objected at the top of our lungs. But for several thousand anti-semitic incidents over the last four years, from Charlottesville to numerous other venues, we haven’t objected loudly or forcefully enough, because the rate and intensity has grown every year.

There are also clear differences between Germany then and the US now. Our population isn’t penniless and furious at having to pay reparations for the last fifteen years. It has been dealing with a recession, but not a world-wide depression. More fundamentally, we have a culture and heritage deeply rooted in democracy and capitalism.

Which brings up another irony. Donald Trump, the rioters, and Conservatives in general, want less regulation, less government, and more emphasis on “letting the market decide,” because private enterprise is quicker to react and more innovative.

Guess what happened after Trump’s riot? While the House, the Senate, and VP Pence were discussing the pros and cons of impeachment vs the 25th Amendment, Facebook, Twitter, YouTube,  and Amazon simply locked the Inciter-In-Chief out of the Internet. The PGA, Deutsch Bank, Signature Bank, Marriott, and others refused to do business with him. Multiple other companies will no longer donate to Trump or the 147 Republicans who tried to stop the vote count. The market decided – quickly and innovatively.