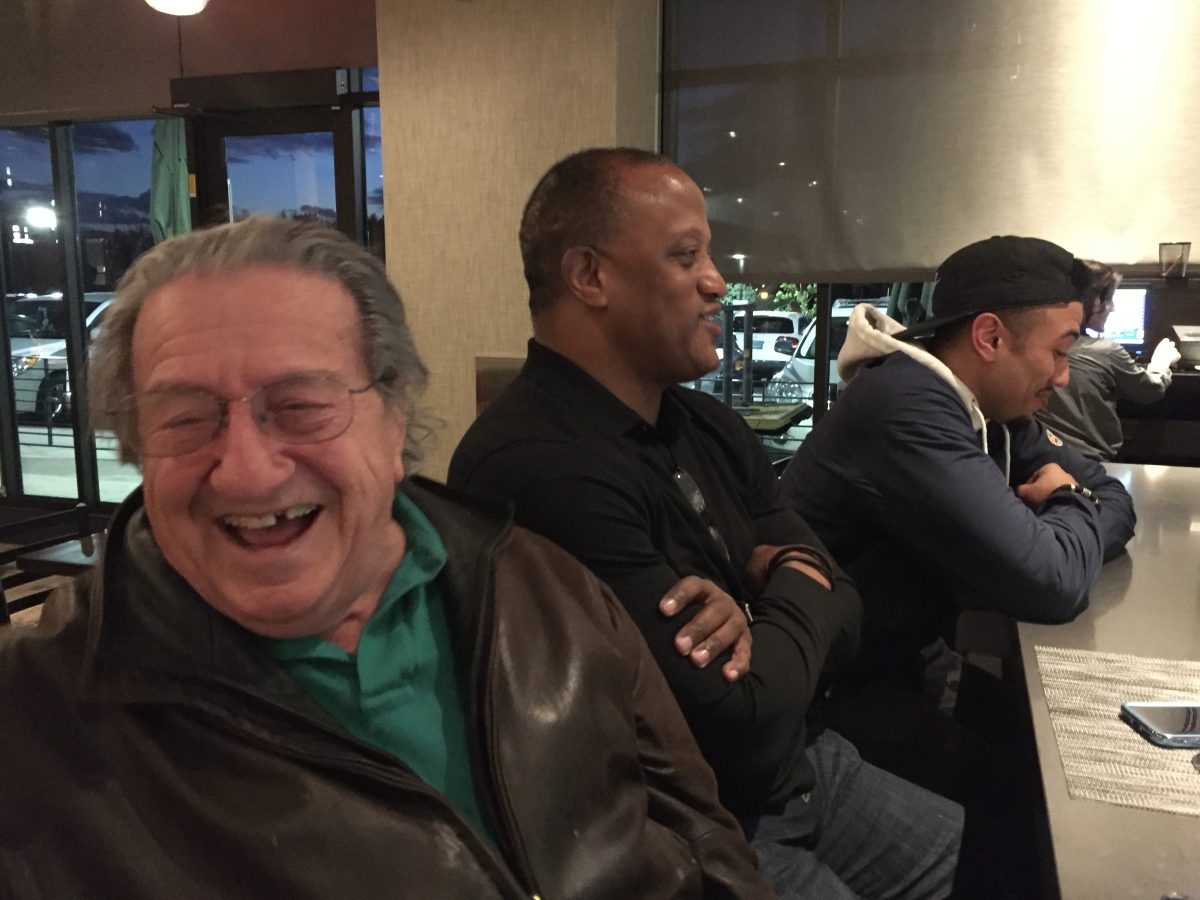 It is Playoff Sunday. I am watching the Titans-Chiefs game with my sister. Around five pm, she decides two things: first, the two of us aren’t sufficiently animated to do justice to the game (we both want Coach Andy Reid to win as a payback for the Eagles firing him in 2012 for not winning a playoff game – the same year his son died), and second, we’re hungry.

So we go to a restaurant where there is great food and, it turns out, plenty of very animated football fans, one in particular.

We walk up to the bar and see two seats, but they’re not together; they are bracketing a trio of very big guys in front of a huge screen carrying the Titans – Chiefs game.

My sister gives me a “Do something, Doofus!” look.

Being the macho guy I am, I gingerly ask the guy at the end – the smallest of the three, the one with grey hair, if they would mind moving down a seat because my sister wants to sit next to me.

Instead of growls and hisses, they smile and immediately move. We shake hands all around. The old guy’s grip is ‘Ouch!” strong. (Ok. I guess some old people need to do that.)

He has an infectious smile, “let her sit next to me. She’s way better looking.”

I watch the game as he starts to charm my sister. (What a Bozo. No way is she going to deal with 70 year old guy).

The Chiefs score. I cheer. The old guy and his buddies cheer.

I do a double take.

“Well preserved! That’s me!” That infectious smile again. My sister looks at me.

“Yep. Divorced three times. And I have a 44 year old fiancee!”

(Right. And I’m trying out for the Eagles next year.)

“And” says the old guy, cupping his hands far in front of his chest, “well endowed! Who says 90’s too old!”

The friend nods again. “I met Bill a few years ago. He was playing jazz piano in a nightclub. Really great”.

“Yeah. Bill backs me up sometimes. When I’m lucky.”

Bill puts on a serious face, “I’ve been married three times. 7 kids. I hate them all”. A quick wink.

We laugh. My sister asks to see his license. He shows it to her. She looks at it in silence then shows it to me. It says he was born in 1929.

Now Bill is laughing like a kid. And I’m starting to believe the 44 year old fiancee story.

I look at the back of the card: “former surgeon, former gymnast, former jazz pianist, present bon vivant.”

I decide to steal that line someday.

The Chiefs win the game and we all cheer.  I talk to Rob. He looks about 35 to me. He tells me about working as an agent for ATF for 20 years and retiring a few years ago. He’s 58.

The 49ers-Packers game starts. It’s a hard choice, because I like Aaron Rogers, but I go with San Francisco.

The third person is Rob’s son. He looks 26 years. And is!

As the game goes on Bill Marcus, MD offers some nuggets:

“Most surgeons won’t admit it, but we make mistakes. I used to feel really guilty when I screwed up. But one day, I thought to myself, ‘I did my best. I’m not perfect’. After that I felt better.”

And, “It’s all about living well. Too many people try to outdo everyone else. That’s not living.”

And my favorite, “Remarrying is hope over experience.”

The 49ers win, setting me up for a really difficult two weeks trying to decide whom to root for in the Super Bowl.

Rob gives us a couple of his CD’s.

As we leave the bar, for a moment the cynic in each of us wonders about this 90 year old. Is he really 90? Is his fiancee really 44? Did he really go from surgeon to gymnast to jazz pianist to…?

“Who cares?”, we realize. “It’s hope over experience.”